Alan - a character of great interest

I want to do justice to the man and I fear that my words will provide an inadequate description of the colourful person who has made rich my Camino walk for 2015. Five years ago in 2010, I walked with Pepe from Alicante and it was that man who was so special and meaningful. They are very different in disposition but similar in that they have both influenced my life in a significant way and will not easily be forgotten. Both men are flawed in some way, but it also means that they are human. I want to be surrounded by people that are human.

Alan is Irish, ten years younger than me, has tattoos, a totally shaved head, is muscular and shows signs of a nasal fracture. The latter could be from competitive sport, but I immediately think he may have been involved in some sort of physical altercation. I also detect a lot of anger. There is something about the physical persona that I find scary although, to my knowledge, I have never been wronged by anyone who answers that description.

I meet Alan for the first time at a cafe along the Camino where we are both enjoying a light lunchtime meal. He is with Sophie, a French woman whom he met along the way and who is resident in London. One meets people on the Camino who are from all walks of life. Sometimes the meeting is a one-time event and afterwards you go your own way.   Life is like that. You walk the same path with someone and then you separate. On very rare occasions, there is something in the relationship that is more substantial and long lasting.

Our tendency is to judge someone on immediate first impression. That can be unfortunate because it is often based on prejudice and doesn’t take in the essence of the person. It may not even be about that other person but about ourselves. Fortunately, there are others forces at play, the most important of which is an energy or vibe that would contradict any manifestation of external appearance. Somehow I must have liked the vibe because three weeks into our Camino we are still together. I also love his sense of humour even if it is directed around some very painful issues.

We get talking about the English-Irish relationship and the historical wrongs that were inflicted by one country on another. I can’t fault him on any of his information because he is well informed about the Easter Uprising of 1916. I may even be on the wrong side of history because, apparently when my family owned a castle in Waterford back in 1790 we were described as “infamous.” That might certainly not help bond us in a  meaningful and harmonious relationship on this Camino.

There is my history and there is his history. He describes himself as a recovered heroin addict. He lost a brother and a nephew to heroin. He had planned originally to walk the Camino with his father three years ago, but his father had developed cancer and died within a short time. So he is walking to Santiago for his father. I am starting to like his story. In answering his question of why I am walking the Camino, I reply that I am doing this walk as a way of celebrating my life despite all the many stupid things that I have done in sixty-five years. I feel lucky to be alive. He tells me that the only thing that he regrets in his life is that he smoked cigarettes until he developed Chronic Obstructive Pulmonary Disease. He too describes his journey as a celebration.

His language is quite harsh  and abrasive with a large smattering of different swear words. Despite the colourful vocabulary, from the rest of our conversation it becomes apparent that he is extremely well read and knowledgable on many levels from literature to music, history, and politics. I don’t like his take on American involvement in the world, which he sees as providing a police force and I see as interference. We are now moving beyond the superficial austere look of tattoos and Yul Brynner haircuts.  But where is the heart of the man? I want to see what makes him tick. I have an intuitive sense, just as I had with Pepe, that I have something to learn from him.

What do we do on the Camino? We tell stories. He loved his brother, but his brother has passed on. He had been in a remand home at age thirteen run by the Christian Brothers where he was physically and sexually abused. In later life, he was a high achiever until he overdosed on heroin. How does the survivor get over that? Some of us do and some of us don’t. It’s hard not to be tainted in some way by such an experience. Alan won’t forget and he won’t forgive. He’s wary of all priests although he has some who are golfing buddies. Where am I in all this? There’s me who wants to fix the world and wants him to let go of the past and move on. I realise that this is an unrealistic expectation that sets me up for failure and I cannot force the issue. It’s not about me.

Alan is now a caregiver to his brother’s son, who is grown up but diagnosed with Aspergers Syndrome. He is missing his nephew while away walking the Camino although he describes the process of looking after him as sometimes frustrating. I sense that Alan sees his responsibility of caregiver beyond being a familial duty. He does it because it is the right thing to do.

Alan is experiencing neck and shoulder pain and, although I try to relieve this through physical therapy, I am just not having any significant positive result. I have to let go of that expectation. Again my wishing to have positive results is pure ego on my part and has no place in the equation. I want him to have a long and healthy life, but this is not my responsibility. I cannot grant this nor is he asking to be fixed.

Alan has the gift of being able to effectively engage people we meet along the Camino and has a remarkable ability to remember names and faces. He has a genuine interest in his fellow travelers and seems ecstatically happy when we happen to bump into someone that we had met several days previously. I phoned him this morning from Toronto and he tells me that he is meeting next week with four Irishmen that he had met on the journey and that Sophie will be flying over from England to join them. Relationships for Alan are forever. I know that from the stories he tells.

One afternoon along the way we meet a twenty-five-year-old German man whom Alan had encountered three or four days previously. At that time, the young man was evidently in huge discomfort, disoriented and headachy. It was probably heat stroke. Alan had ensured that a passing motorist take him to a hospital for medical attention. Now the German is tearfully thanking Allan for his attention. Alan dismisses the gratitude as something that we do for each other on the Camino. Is it really?

Despite a seemingly tough exterior (back again to my image of the tattoo and shaved head) there is a soft and vulnerable side. He has wanted his “credencial” certificate for completion of the Camino to be made out in both his name and that of his father. I am prepared to give him mine if they will not allow this. On arrival in Santiago de Compostela, we go together to the Pilgrim office to have our Camino passports examined for all the necessary stamps needed to receive our certificates. What’s important in a piece of paper? Apparently lots. We exit the office together. We hug. The tears flow. We’ve done this together. We’ve been on an important journey: physical, mental and emotional. We've done it.

I love you, brother. 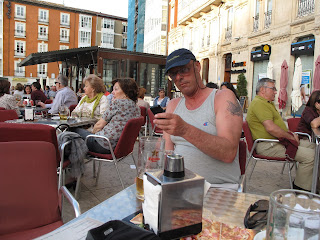 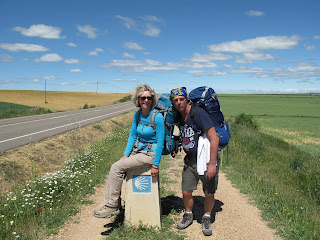 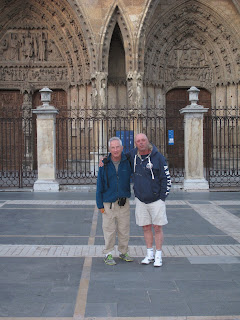 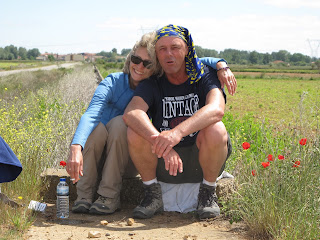 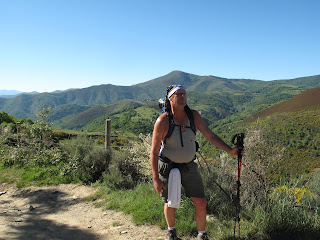 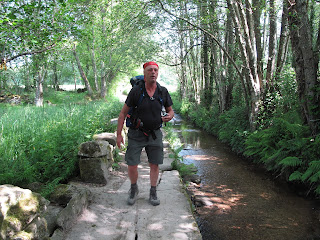 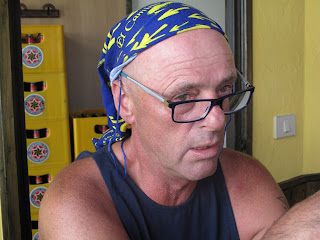 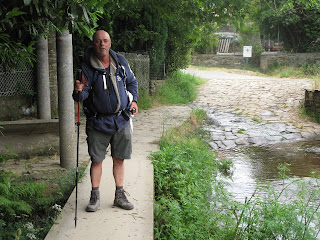 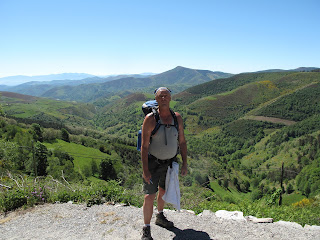 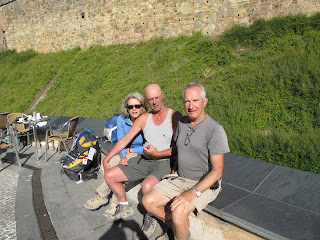 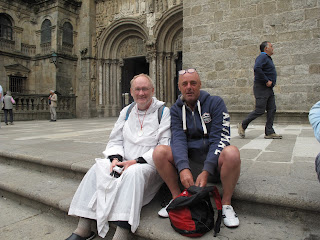