I have arrived in Santiago de Compostela. I am tired - very tired. Still no real aches and pains through mechanical malfunctions because the body has responded just as I hoped it would.  Five years ago I experienced knee pain through degenerated cartilage, shin splints and plantar fascitis. This time, none of that. For this, I have to thank the contributions back in Toronto of Heather Speer, my personal trainer and Miriam Patterson and her gentle yoga classes. These have helped with both the physical body and the emotional.

The extreme fatigue is something else. Today, the last day of walking into Santiago was comparatively a short hop - a mere twenty kilometres. This was in contrast to the thirty kilometre days.  However, today seemed the longest day of the whole Camino. All I could do was put one foot in front of the other and somehow propel my way forward. I suspect that it has been difficult because it is the last day of walking. Put me back in the middle of a mountain range and I could easily walk for another month. It´s a habit and it´s what one does, perhaps like brushing one´s teeth. With the final destination in close sight then it is so easy to lose momentum. I wonder whether it is like dying, that final moment of letting go. I felt like this when crossing the flat plains of the Meseta - I thought it was only the young who had problems with that because there is a lack of extreme visual stimulation. I am still thinking about that - with the sun directly behind me, I am in pursuit of my shadow.

During today´s walk, an Australian pulled up alongside me and all he could do was complain about his journey, the people he did not like along the way and, probably by extension, his life. I told him that I would prefer to walk alone and perhaps I am now included among the "inhospitable." Walking through woods in the early morning and the approach to Santiago has been  superb despite the fatigue. Breathing in the air tinged with a tinge of woodiness and eucalyptus is stimulating. 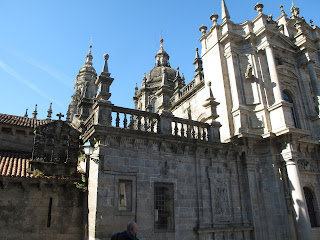 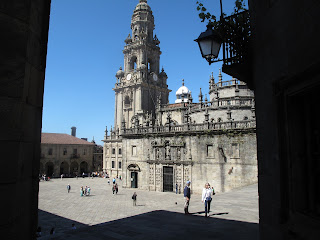 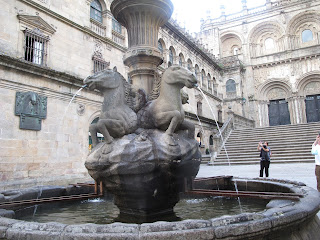 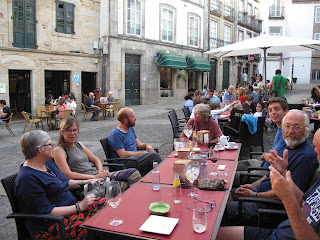 I want to write about someone with whom I have been travelling for several days. His name is Alan and it will require a posting all to itself. Along the Camino, one sometimes meets some very special people. For me, Pepe was that special person five years ago. This time it is Alan. So, stay tuned.