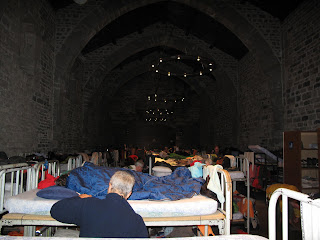 Actually, the truth is I was in shock following my crossing of the Pyrenees. The "refugio" of Roncesvalle is located in a valley which suggested that the morning would involve an ascent out of the valley. I was certainly in no mood to engage in more of the same two days in succession.

The "refugio" accomodation is a rather marvelous dormitory accomodating close to 150 people, men and women, in one room. Perhaps it had been a church before been handed over for its present purpose of accomodating pilgrims. With vaulted ceiling, it was rather like sleeping in a church, along with fifteen century ecclesiastic music played until lights-out at 10.00 p.m. sharp.

During the night the driving rain changed to thunder and lightning lasting right into the early morning. Exciting as that might be, I did not wish to begin my walk soaking wet.

By the time I set off the weather had changed to more of a soft Scottish drizzle - perfect conditions for the day. Until midday that weather continued to be replaced by a hot sun.

My companion today has been Pepe from Alicante. So I have had the opportunity to practice my Spanish. When I had to slow down on descents due to my knee, he has stayed with me. He will ocasionally turn to see how far behind I am trailing him and will good naturedly ask me what is the problem. Probably I have traveled further than I would have had I been totally on my own. So he is challenging me to push a little harder.

Today there have still been several hard climbs. The peak of one of them is named after Roland, a general who fought with Emperor Charlemagne. He is reputed to have done many acts of bravery and machismo in his battles against the Moors. With my present difficulties and in my somewhat weakened condition, I do not think I like the guy.

We have ended up the night at a refugio in the town of Zubiri. There is nothing much to recommend it other than good company. Pepe bought ingredients to make up a delicious rice dish with cured ham. I supplied the wine. I had bought a wine in St Jean Pied de Port and had been carrying it for the last two days. Too much extra weight. I will not make that mistake again.

Tomorow, the land flattens out somewhat and I plan to get as far as Pamplona. I do not think I will be taking part in any running with the bulls.

PS. I am hoping to contribute photos with this blog. The problem is finding an internet cafe that will allow me to download photos. Stay tuned on this one
Posted by Unknown at 12:36 PM