In the title to this post, there is an accent that goes over the "N" in Logrono. That way you know that you must roll the n and make a sound like Logronyo. God know where the accent is  on this computer and God is not telling me.

Logrono is the capital city of the province of Rioja. I am looking forward very much to sampling some  of the fruits of this region once I reach my destination for the day. This will be twenty eight kilometers, unless I take a wrong turning. Just follow the yellow painted arrows or a "scallop" design. It´s difficult to get lost and the rule of thumb is that, if you haven´t seen a sign for about a kilometer, then you have taken a wrong turn. However, it is easy to get distracted if you are in a concentrated conversation with someone. I am not very good at multi-tasking. Today I am walking alone - small relief if I get into a conversation with myself because I am often on this journey in a conversation with myself.

I am thinking of the Navy Seal that I had met earlier and this,  in turn, made me think of the current principal of my old high school. He also had walked the Camino this time last year. He had made an earlier contribution as a soldier and had received the highest decoration for bravery under fire in the Falklands war between England and Argentina. He had charged a machine-gun post and somehow successfully survived the outcome. In so doing, he had probably killed his opposing soldiers - someone´s son, grandson, someone´s lover - someone possibly with children of his own. Gone, finished, life over. I would probably have  done the same in an act of self-preservation but what an incredible waste caused by a land claim that has little  concern for those involved in the fighting.

I stop to chat with the retired navy psychologist that I had met two days earlier.  Or is it yesterday? The days seem to blend into one another and, anyway, the time is insignificant.  He is resting under the shade of a tree. He had told me that he had received so many signs from his departed wife in the form of pennies mysteriously found. Pennies from Heaven!  I marvel that a scientist still has left intact some sense of mystery that goes beyond the scientific model.

There are two little walled towns less than a kilometer apart. There is Sansol and then round a corner Torres del Rio. I wonder whether these townships grew up in competition with one another. I stop for a yogurt and a coffee and keep walking.

A further 15 kilometers is located the burial place of Cesare Borgia - one of my favourite characters from 15th Century European history and a son of  Pope Alexander Vl.  As an example for the Catholic Church flawed but very human.

Not included in any description to date is that I am stunned by the scenery as I walk by the Camino and words alone do not effectively describe my joy in walking this way.

Finally arrival in Logrono and my resting place for the night. I am staying at the Parochial refugio attached to the Iglesia de Santiago. This is a hostel that is run on donations from people staying. Included in one's donation is both dinner and breakfast. Five years previously I had stayed here and the parish priest had been  in attendance for dinner, leading to slightly awkward silences from time to time. Then, there had been two bottles of Rioja placed on the table for fourteen people. The maths had not been good for anything other than a small tasting. This time, there is no wine on the table and no priest in attendance.

The meal is simple consisting of a salad followed by a lentil and ham stew and yogurt. Finally the priest arrives bringing with him three bottles, each one slightly different - one particularly spectacular because it is aged in oak. At the end of the meal, he produces a  grappa made by his own family, a double distillate made from brandy that is spectacular in its subtlety of flavour.

I get talking with a fellow Canadian from Ottawa who is also walking the Camino for his second time. His name is also Tim and he is a priest. I enjoy lively discussions and his keen intellect. He has several very good ideas that will be applicable to the publishing of my book and does not seem alarmed at its sometimes very anti-Catholic commentary. 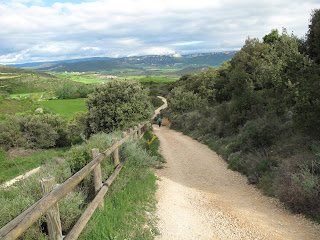 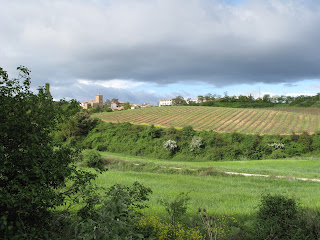 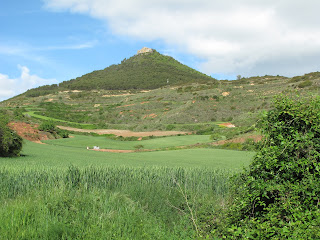 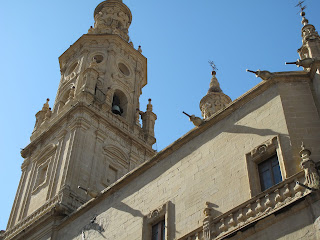