Zariquiegui to Puente La Reina and on to Estella

I will be adding more photos to each blog from time to time. However, not all computers along the way have the necessary hardware to include pictures, especially in the smaller communities along the way. I also seem to be losing descriptive passages. I imagine the latter is a component of my own incompetency on matters computer related. Gradually all will come together as it is intended. This is the Camino, after all. I still find myself getting frustrated by issues that, in the big picture, are not all that important. Just let it go.

The day´s walk to Estella has been a good combination of walking alone and walking with others. I walked with a Navy Seal, no such thing as a retired species of seal. As I get more and more involved in my healing work helping people reach their physical optimum, I have sometimes toyed with the ridiculous idea of doing a navy seal training. Jumping out of a helicopter from thirty feet is far distant from anything that I would feel comfortable in doing. Training of such physical intensity is something that I will leave to another life. And from his description of the emotional, I will leave that to the life after that.

In a conversation with someone from Texas, he started the beginning of an interesting comment when he spoke of overly living in the past. I couldn´t wait to to hear any further elaboration of his understanding. What were his regrets and where had he failed? On the Camino, conversations tend to deepen with each successive sharing. He had worked for the United States Navy as a psychologist and had lost his wife five years previously. He spoke with some obvious pain about his loss and yet felt that she was still present with him. He had planned to come on the Camino the year previous but had himself developed cancer. So, this time last year he had been receiving chemotherapy.

More when I can find a better functioning computer. 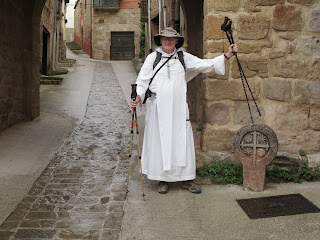