Charlotte, Torben and 37 kilometres of travel 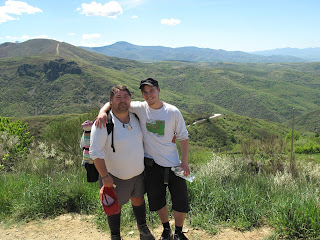 Today was an unusual day. For the first time got up at 5.30 a.m. with the intention of traveling some distance. I am starting to worry that I may not have allotted sufficient time to get to Santiago de Compostela. I was also a little concerned that I needed to be well on my way before the sun was at its most intense. Found that the battery on my flashlight was almost completely depleted. Therefore, without waking my fellow travelers, I was floundering about in the dark trying to pack a backpack 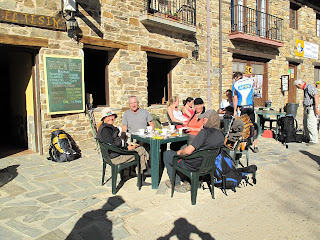 I was on the road by 6.15 a.m. just a little after first light. By early evening, I had set a record and exceeded my own personal best distance and was 37 kilometers closer to my destination. Despite the crossing of a mountain range that included a differential of over 500 meters, I found that the ascent was comparatively easy. My cardio vascular is excellent. The descent seemed to increase the pain in my shins. With an evening meal inside me and copious amounts of red wine, the world is fine again. The weather has gone from unseasonably cold to unseasonably hot. Certainly, the camino has the ability to test. I am now in a little town called Molinaseca - just 8 kilometres before Ponferrada.

Have heard that a Spaniard on my path today had to be rescued by helicopter because of heatstroke. This camino requires vigilence, without which you can easily be taken out of the picture. It is essential to stay in the present. 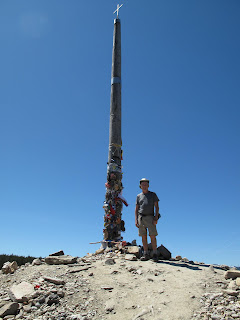 Have met some interesting people along the way. The first was Charlotte, who is originally from South Africa but has been living in Germany with her husband. She is 67 years old and was a violinist with a leading orchestra in Germany. Her husband was a bassoon player. She decided to come on El Camino because her husband has always organised all aspects of her life. She fears that if he were to die, she would be incapable of taking care of the minute details of daily life. So here she is along on the camino. She tells me about her children, one of which is also a bassoon player and married to a flautist. The children had met at the University of Freiburg, when they were students of William (Wib) Bennett. Six degrees of separation because Wib had conducted private lessons at my house in Toronto.

I have asked her whether if, in walking, she hears music? Yes indeed she does, but it is not classical, but more a rhythmic four breaths in and three breaths out. My own music, with the 30 degree temperatures, are the music scores of Sergio Leone movies - the Good, the Bad and the Ugly. Occasionally, I will move into Ten Green bottles.

The second person along the route was Torben who introduces himself as "Torben and I am 125 kilos." Grammatically, he is correct. However, that is not who he is. He is a man who does neuro linguistic programming and he has a personality that is inspiring.He says that he is on the Camino because, with his weight problem, he would rather died here than die in front of a computer at home. Along the way, I see a young man running up hill towards us - crazy in this intense heat. It turns out that this is his son who had gone on ahead to book accommodation and who has returned with fresh water. Their embrace brings a tear to my eye. 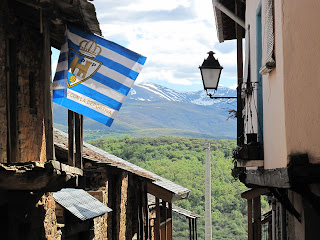 Almost at the summit of this mountain range, I came to a monument called the Cruz de Ferro (Iron Cross) set upon a huge pile of stones. This marks the border between the land of the Maragatos and the region of El Bierzo. Adding a stone from home to the pile is an important modern pilgrim ritual. It is an exercise in letting go - perhaps a relationship that has disintegrated, the death of a loved one, or just a symbol of some aspect of the self that no longer works. I found myself overwhelmed by the energy and intensity of what was there. Some had inscribed their stones, some had written love poems and in one corner was a picture of three children between the ages of six and ten who had died in a car crash. What unbearable pain.
Posted by Unknown at 4:41 PM