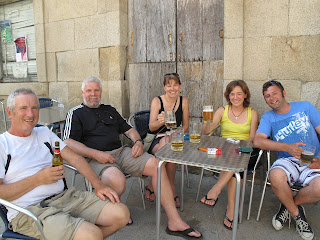 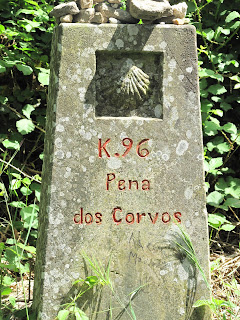 Today, I decided to walk only 23 kilometres - for me now, this is a gentle stroll in the park. Did not get up before the crack of dawn - I am feeling lazy. However, it seems that I am already on the road by 7.10 a.m. I even stop off a couple of times - the first, after about an hour for a cafe con leche and pan tostada. The second stop is half way to my destination for a mixed salad of lettuce, cured ham, asparagus, cheese, olives and a glass of red wine. The olives here are fabulous and lack the bitterness of canned olives and lack the greasiness of the Greek olives. 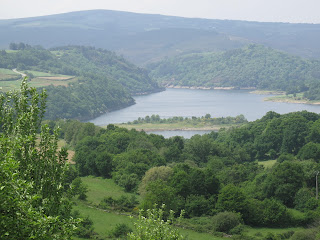 The camino from Sarria to Santiago de Compostela is now populated with a different kind of pilgrim. To get a certificate showing that you have completed the pilgrimage, all someone has to do is complete the last 100 kilometres. So, many have joined the camino here. The ones that have joined here seem to be prone to rapid conversation, argument, carry cell phones, which they use frequently and are less likely to be contemplative. My Spanish is now good enough to gently repremand a "pilgrim" for answering his phone. Actually, my best course of action is to lengthen the space between them and me. I do get some amusement watching some of the newcomers nursing blisters after a mere 5 kilometres. Still, I have met some people who have joined the last stage of the camino, who seem to have a purpose other than a cheap holiday. 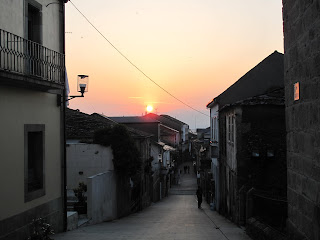 I am now only 95 kilometres from Santiago de Compostela and have quite sufficent time to cover this distance.
Posted by Unknown at 10:19 AM