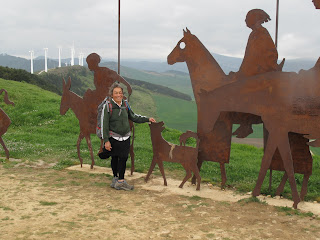 Another day started with temperature barely above freezing. I almost feel the privilege of having been exposed to Canadian winters. Rain gear was needed today. Still problems with confronting mud. Very important to stay in the present, as a moment of inattention resulted in me landing heavily face forward in the mud.

Today I managed 26 kilometres to Fromista. I could have travelled further but then one runs the risk of arriving at one´s destination to find that all accommodation has been taken.

Technically I am in the flat landscape of the meseta. At this point it is more like rolling countryside.

Yesterday, met some young Australians 29 and 27 who have been experiencing real problems with the cold, the rain and the mud. They are getting married in November and decided that they wanted to do El Camino before their big event. One might have thought that El Camino might be more easily accomplished by the young. The reality is much different and I have encountered many young people experiencing real hardship to the point of having to cut short their journey as a result of severe blisters, tendinitis, knee problems and shin splints. The city of Burgos, two days back, seems to be the collecting place of the walking wounded.

Perhaps it is the ones unreasonable expectation of El Camino that are to blame.

An example of someone most likely to succeed in her journey is Isabel. I have not seen her for 4 days now although I have had word that she is just one day behind me. In my early days of El Camino she usually arrived at her destination ahead of me. At age 77 she is about 5´feet tall. One of her more flippant answers as to why she is doing El Camino is that she thought climbing Mount Everest might be unreasonable. She embarked on El Camino against the advice of her children when one of her grandaughters might pòssibly accompany her. She is completing El Camino one step at a time. She sees the positive in everyone she meets and is fabulous company on the journey. I really miss her. Perhaps one of her reasons for success in her journey is that she is very much in the present moment. If she gets caught in a rainstorm, there is little point in her wishing she was somewhere else. It is her acceptance of her reality that is an inspiration.

I might wish for warmer weather, just enough rain to be able to cool off, even single room with en suite bathroom, but that is not the reality.
Posted by Unknown at 1:17 PM