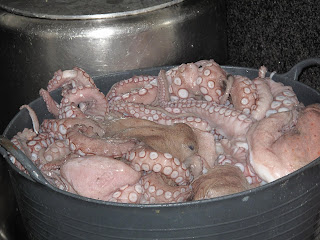 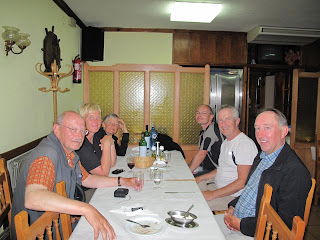 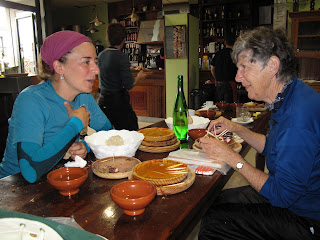 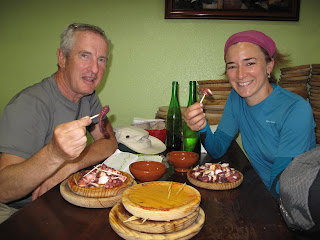 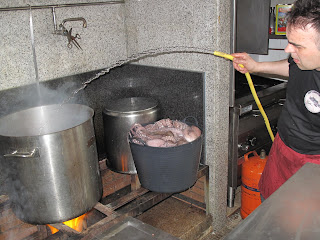 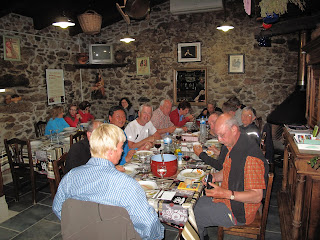 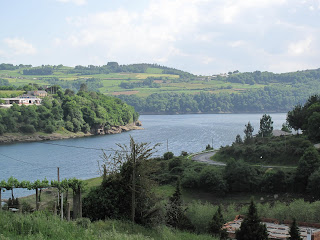 I think the deities have the same sense of humour as me if I were to have the job. I set off at 6.30 a.m. from Portomarin with rain gear at the ready. After all, this is the province of Galicia and, if it is going to rain anywhere, it is going to rain here. Got as far as Gonzar, 7.5 km down the road when it started to bucket down. This was my stopping off place for breakfast. By the time I had put on rain clothes and a waterproof cover for my backpack, the rain had stopped. However, the clouds still looked ominous, so I kept covered up. Trouble with rainproof clothing is that it does not breathe, and from the exertion of walking I was sweating profusely - perhaps even losing weight by the minute. After two hours more walking, I had had enough - it obviously not going to rain again so I thought I could dispense with the extra layer. No sooner was this done, when it started to bucket again.

Throughout the day, I played this game three times. Actually, I rather enjoy the rain as it adds aroma and freshness to the surrounding foliage.

The added benefit of the rain was to see the somewhat dampened spirit of the "Sunday pilgrims," as I have started to call them. I should be letting go of my resentment for some of these people but at the moment, I can´t. They tend to talk non stop among themselves, when not answering cell phones, and it seems they spend little or no time in silent reflection. This seems to be a peculiarity of the last 100 km of the camino. I have really enjoyed my silent walks over the last month

Covered 26.5 km to San Julian and stayed in a rather splendid stone walled "refugio" with a well stocked bar. Price of accommodation can vary from by donation, or any amount you wish, to a fixed rate of anywhere from 3 to 10 euros.
This particular "refugio" had a particular recommendation in a German guide book. I have recently been crossing paths with a very nice bunch of Germans, and they have really helped me along the way when I was suffering some pain. Pilgrim meals always consist of a three course menu with plentiful supply of wine. This is all for a nominal sum of eight or nine euros. The menu here was a vegetable soup specialty of the area with lots of potato and cabbage, a thin slice of fried pork along with mixed salad. Dessert was either cheese, ice cream or a Santiago tart. The latter is my favourite - moist with a slight touch of almond. I have also developed a taste for a digestive herbal liqueur called Licor de Herbas.

Today, I managed another 26.5 km. to Arzua - a not particularly interesting town, but then I will only be staying overnight here. The weather again was somewhat rainy. However, I stopped off in Melide for lunch at a 'pulperia', called Exequiel. This is renowned for its pulpo (octopus). I ordered a glass of wine to accompany, but that does not seem to be their custom - they brought a bottle. This is my first visit to a restaurant where I did not want the experience to finish. I ended up ordering three plates of octopus - one after the other. Other friends from the camino joined me and, in summary, I am astounded how I managed the remaining fifteen km to my destination.