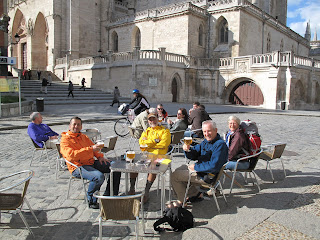 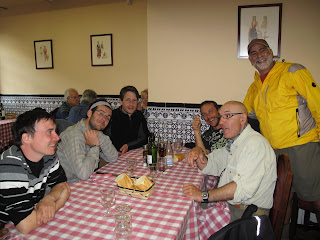 I would like to thank Advil and Voltaran 50 mg for having made possible the crossing of the Pyrenees without pain and for having solved my shin splint problem. Of course some proper stretches, advised by Richelle back at the clinic have also helped immensely. I feel like a racehorse again and am ready to proceed. I had thought that I would be sidelined for a little while while recovery took its time. Not that that would have been a bad thing.

I also want to thank Doug, Averill, Donato and Don who have been encouraging me onwards from back home in Canada.

I have loved Burgos - birthplace for me of Ferdinand the Bull!! - my favorite childhood story, originally written in 1939 about a bull that would not fight and only wanted to smell the flowers. I won´t spoil the whole story for you, but he becomes the hero. Burgos is also home to El Cid who managed mythical proportions in his fight against Moors. This is not such a great story as, under their occupation, there was at least religious toleration for Jews and Christians.


Last night I was feeling a little down and bumped into Brad at a bar opposite the cathedral who I had not seen since Los Arcos - approximately 5 days ago. He works with inner city kids and is from New York. We ended up having a few beers together and then going with a bunch of people for dinner. Thanks Brad, you helped me more than you realize.
Posted by Unknown at 12:55 AM